Let’s face it; sun and sand are still the highlights of a Florida Vacation. That being said, today we are demanding more from a holiday than just lying on a beach. Long associated with college kids at Spring Break, the south Florida city is undergoing an astonishing makeover into a high-end hotspot.

Located in Broward County on South Florida’s Atlantic coast, between Palm Beach and Miami; greater Fort Lauderdale is home to 37 kilometers of wide sandy beaches. This destination places the areas’ beaches –including, Hollywood, Dania, Deer Field Beach, Fort Lauderdale and Pompano Beach – among the cleanest, safest and most user-friendly in the U.S. One can enjoy the waters in other ways too. The area contains more than 480 kilometers of inland waterways that wind through palatial estates, citrus groves and the Everglades. The Intercoastal Waterway and the waterfront homes that dot it have earned Greater Fort Lauderdale its’ reputation as the “Venice of America”. The Jungle Queen offers guided day tours and dinner cruises through the canals and waterways, complete with musical entertainment and colorful commentary on sites and celebrity residents, past and present. Another transportation option is the Fort Lauderdale Water Taxi service that takes you to and from hotels, attractions, restaurants and shops along the waterways.

There are also treasures to be found under the water, scuba-divers will find clear water and coral formations as spectacular as those found in the Florida Keys, but reefs here are less crowded with divers.

Off the Beach Attractions

Away from the water, Greater Fort Lauderdale has plenty of attractions to keep one busy. The Broward Centre for the Performing Arts plays host to Broadway Musicals, concerts and ballets. History buffs can explore Old Florida at Bonnet House, the Fort Lauderdale oceanfront estate of the late painter, Frederic Bartlett; Stranahan House, the oldest home in Broward County; and Flamingo Gardens and Wray Botanical Collection, once of the areas first citrus groves and now a botanical garden. Not to be missed is Butterfly World in Tradewinds Park, where thousands of butterflies fly free in a specially designed screened enclosure. A hummingbird exhibit and hatchery are also part of the complex.

Golfers have a choice of more than 56 public and private courses in the area. The PGA Eagle Trace is perhaps the best known, but others are just as challenging so I’ve been told, as I am not an avid golfer.

Shopping Spots… as far as shopping goes, Greater Fort Lauderdale has everything from flea markets to chic boutiques, and a lot in between. Sawgrass Mills offers more than 350 brand-name and designer outlets, specialty shops and restaurants. The Galleria Mall, a short walk from Fort Lauderdale Beach, has upscale choices such as Neiman-Marcus, Saks and Ann Taylor. Fort Lauderdale’s Las Olas is a favorite hot spot with it’s’ boutiques, galleries and restaurants. Antique lovers head to Dania’s Antique Row, with 150 shops in a one-block area just south of the airport. Looking for bargains, you may want to check out the air-conditioned Festival Flea Market in Pompano. The Fort Lauderdale Swap Shop is home to garage sales, farmers’ market, international bizarre, country fair and free daily circus.

More than four million people cruise out of Port Everglades each year, making it one of the world’s largest cruise ports.
More than 50 ships depart from the port destined for the Caribbean and points south. 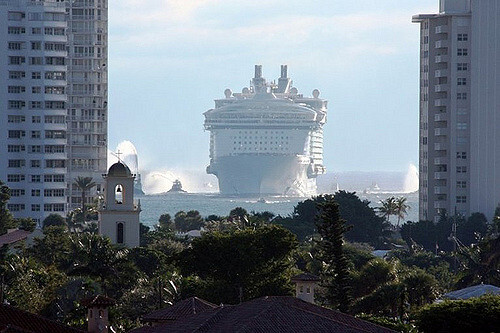 Savor a true taste of “Irish Splendor” when you spend the night in ...

Venture to a place where crashing ocean meets craggy mountains, for...

Sí, Mexico. See it again, or for the very first time.

Discover the magic of Marrakech on this whimsical three-day tour. E...